Around the beginning of the 20th century Trentham became a desirable place to live for the middle-class people of the Potteries and the reasons for this were many. Trentham estate had started to sell off land for housing development before the Sutherlands left and, by 1907, seventy-five houses had been built in the area both for owner occupiers and rentals.

The auction of the Sutherland estate in 1919 allowed a new era of house building in the eastern part of the parish which was taken into the County Borough of Stoke-on-Trent in 1922. Trentham Golf Club was here after 1897 and also a regular train service from Trentham station, together with the location south of the Potteries smoke, all combined to make the area irresistible.

The 1911 census indicates that the majority of Trentham residents still had connections to the Trentham estate, whilst the numbers connected to the pottery industry was in single figures. However, by the time of the 1939 Register, with the increased number of large desirable houses, the number of residents giving an occupation connected to the pottery industry is closer to fifty and the majority of those were pottery owners. Many were members of the local golf clubs and rode with the hunt, they often had close connections with local churches and were also active freemasons. It was perhaps not surprising that their families sometimes intermarried. Between them they provided employment for thousands of pottery workers and together produced wares that graced tables and rooms the length and breadth of the land, if not the world.

The profiles feature some of the local owners or general managers who had works making earthenware and china, but also those who made colours for the pottery industry as well as essential, less decorative ceramic items. All contributed to the confirmation of Stoke on Trent as "The Potteries". 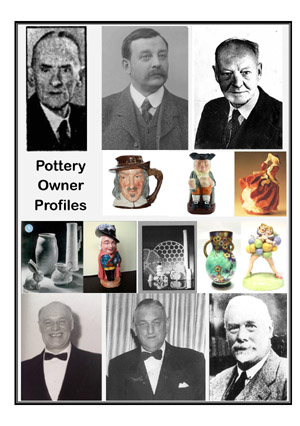