William Moorcroft was born in Burslem

He was employed as designer at James Macintyre, Washington Works, Burslem 1897 - 1913

Before him the designer was Harry Barnard, who went to work at Wedgwood, Etruria

Moorcroft developed a lasting relationship with Liberty of London, which resulted in a special backstamp being used from about 1903 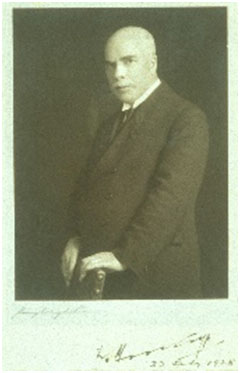 At once Moorcroft began to plan a new factory, where he could continue to make the style of pottery which was associated with his name

1913 was a spectacular year for William Moorcroft because he married Florence Lovibond, a factory inspector and he moved with his workforce to the new factory in Cobridge, probably the first pottery factory built in the 20th Century, finance in part by Liberty's 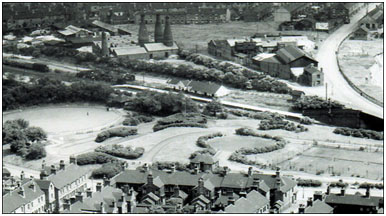 The factory may have been designed by Florence, in harmony with the regulations which were passed in 1913 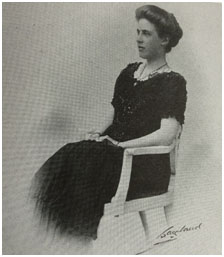 William Moorcroft never had a car

Florence died of pneumonia in 1926

He married for the second time in 1928. His second wife, Hazel, was a member of the Lasenby family which owned Liberty. They had one son, John, born in 1938 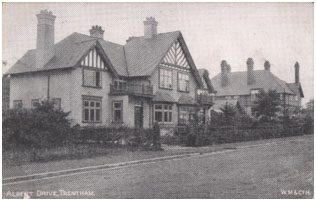 His method of making is the same today

Moorcroft tube lined his designs, filled in the spaces with oxides, finally covering the whole pot with a colourless glaze. Fired twice

An area in which Moorcroft succeeded was flambé, a deep red surface, which was derived after a third firing when copper was used, mixed with earth

He devised special designs for flambé. William's health was not robust. He had taken the factory through two World Wars

He died in October 1945, when Walter took over the daily running of the Company 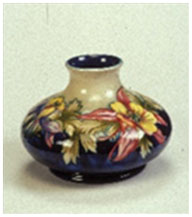 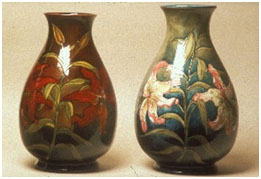 Walter Moorcroft was born in Trentham

He lived at Glendair, Albert Drive (Road), Trentham until he married his first wife in 1946

In 1935 Walter joined William at the Cobridge Works. He could have gone to Cambridge University

He learnt the trade by observation

Walter's early designs were not credited to his hand, instead they went from the Works as William's

Spring 1943 called up for military service. Advised to go to the Intelligence Corps

Walter took over W. Moorcroft Limited on 1.10.1945, his leave was extended until demobilisation took place 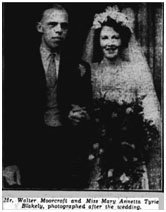 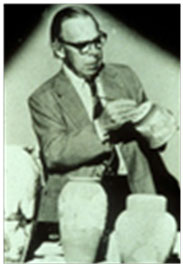 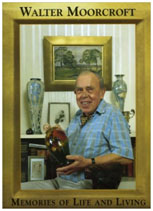 The continuation of the Company

Walter reduced the number of shapes

He made many small things

Moorcroft became an Associate Company of Churchill China. The raised lined were cast in with the mould, so different from the past

This did not settle the Bank. They gave the two brothers 48 hours to clear the huge debt. They invited Richard Dennis and Hugh Edwards to take on the Company in September 1986. This worked for a short time, until December 1992.

The Edwards Family has been in sole charge since January 1993 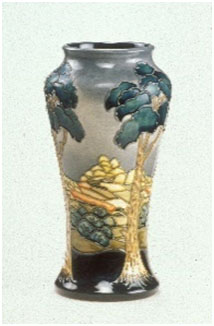