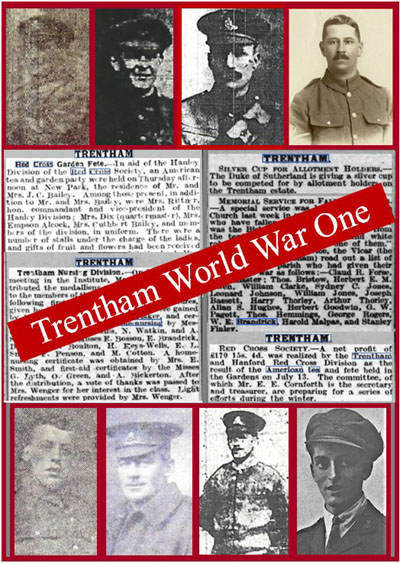 During World War One many of the Trentham residents were still working for the Trentham estate, although the Sutherlands had left the area in 1905 and the Hall had been demolished in 1911/12. The fourth Duke, and the last to occupy Trentham Hall, died in 1913, and so the identity of Trentham as a ducal village was already changing before the war started. During the war, the Trentham estate stables, smithy and park became a busy remount unit preparing thousands of horses for war service. Over 40 local men volunteered or enlisted for military service, of whom 17 died during or after the hostilities. On the home front local women engaged in fundraising and nursing activities and life carried on. Soon after the war ended the Trentham Estates, including many local properties and parcels of land, were auctioned off, marking the beginning of a new era for Trentham. 17 Names - a short film about the World War One names on the memorial (5:54 minutes)
Hem Heath Men who survived World War One - (Information panel pdf)
Letters to Hem Heath - two children from Ash Green School travel back in time to 1916 - (film 23:48 minutes )
Trentham resident, Hans Pauer, and Anti-German Hysteria - (Text of lecture pdf)
Trentham Remembered - a conversation with the past - (film 35:56 minutes)
VADs on the Trentham Home Front - (Information panel pdf)
War Horses - Trentham Remount Unit during World War One - (video 2:55 minutes)
World War One Trentham War Memorial - Names from WW1 - (Information panel pdf)