Photo shows examples of their blushware

In 1894 they introduced Carlton Ware and the factory on Copeland St. in Stoke was named Carlton Works 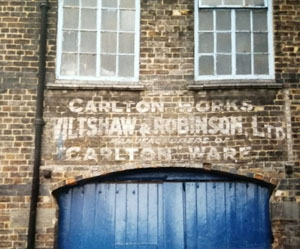 In 1894 Wiltshaw & Robinson's backstamp changed from the Ribbon mark to the Crown Mark. 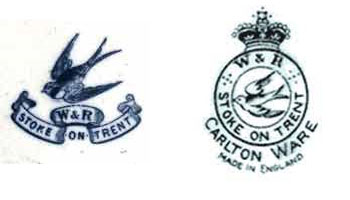 In 1903 Wiltshaw & Robinson began production of Heraldic Souvenir China which continued into the 1920s. 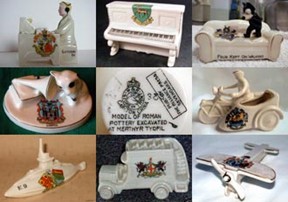 In 1911 The partnership dissolved leaving JF Wiltshaw in sole ownership. The business continued to trade as Wiltshaw & Robinson Ltd 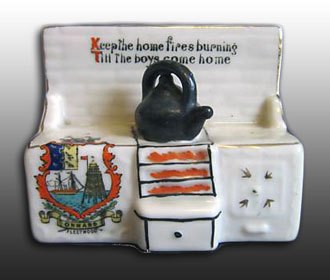 In 1918 James Wiltshaw died in an accident and the business passed to his elder son, (Frederick) Cuthbert Wiltshaw (born 1892)

Photo shows Cuthbert with his daughter, Betty, from family collection. 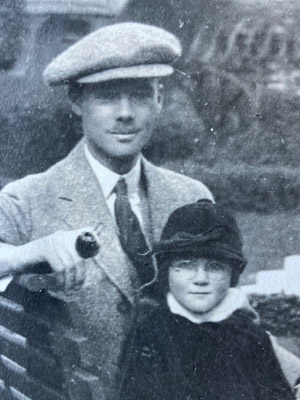 The interest across the world in the discovery of Tutankhamun's tomb in November 1922 led to a great variety of commemorative ware and, not to be outdone, CarIton Ware offered a range of bowls, vases and jugs showing images of Egyptian Art. 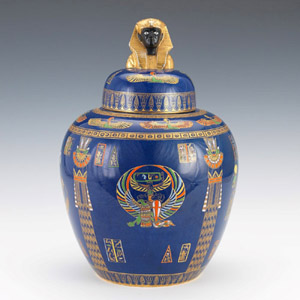 In 1915 Cuthbert married Alice Tomkinson and they went on to have four daughters - Betty, Pauline, Patricia and Eve.

In the late 1920s, many fantasy designs were developed using multi-layering techniques. There were lustrous glazes and gilt outlines highlighted by bright enamels. 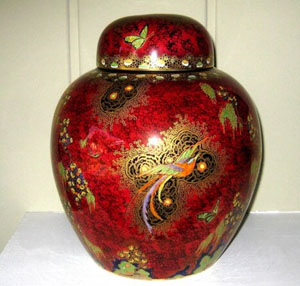 In 1928 the company expanded and acquired the Vine Pottery, previously Birks, Rawlins & Company. This company made Carlton China while Carlton Ware was earthenware. 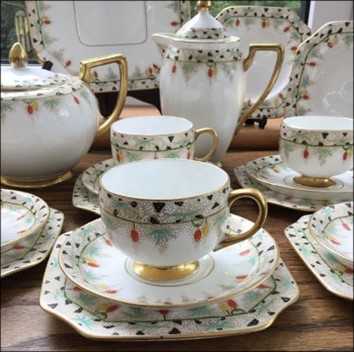 In May 1931, bad judgement by Carlton Ware's bank, led to the appointment of a receiver, though less than a year later receivership ceased and the bank eventually paid compensation. 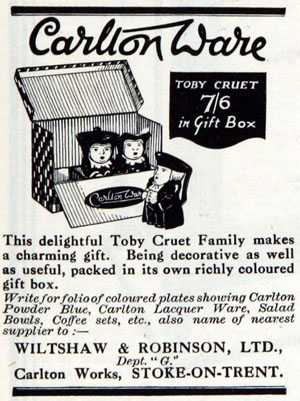 Douglas worked with his brother at Carlton and "managed the clay end." He was popular and liked by all he worked with. In 1948 he resigned his directorship and moved to Eire to work for a pottery there, but after a short time returned to Stoke. 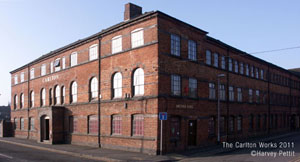 Douglas and June's marriage ended and she moved away to Burnley. Douglas died in Newcastle in 1960.

Cuthbert's daughter, Betty, after studying at Burslem School of Art, became a ceramics designer joining the design team about 1937. She was the only one of her siblings to join the family firm. 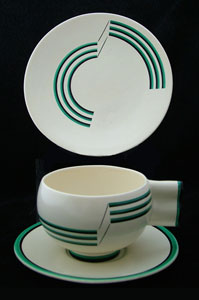 Attending a Carlton works dinner to celebrate her 21st in 1938, Betty is standing. Her fiancé Francis Waylen is on her right and her parents Cuthbert and Alice on her left. 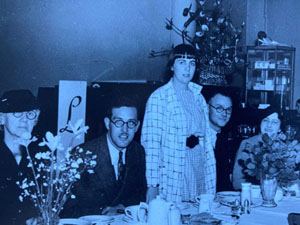 In 1938 Betty married Francis Waylen and they moved to Scotland. 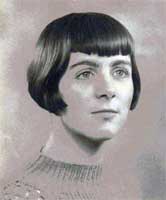 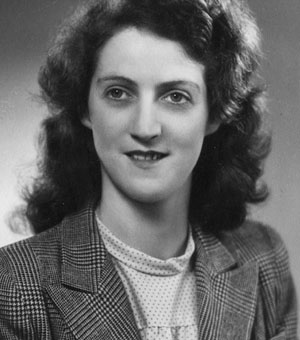 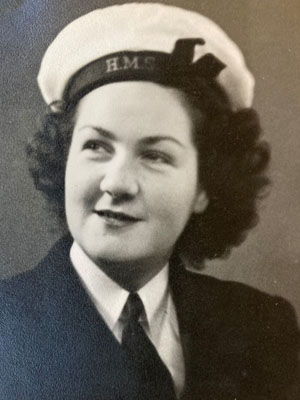 Eve Wiltshaw studied medicine and became a pioneering research oncologist at the Royal Marsden Hospital in London. She received an OBE for her work and has a ward named after her.

Photo shows Eve with her OBE 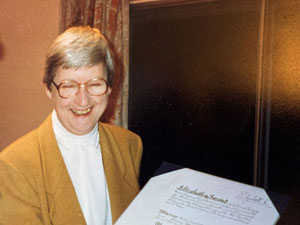 Francis Waylen died while fighting in Sicily in 1943 and Betty returned south to live in Barlaston with her parents. In 1945 she and her children moved into a house on Fieldway, Dairyfields in Trentham.

Cuthbert's wife died in 1952 and he moved into Fieldway with Betty and his grandchildren after the house had been extended to accommodate him. 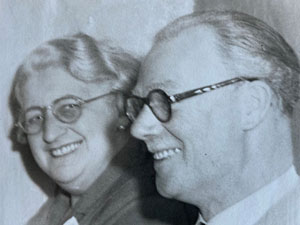 Photo shows the Fieldway house (on right) in the late 1940s. 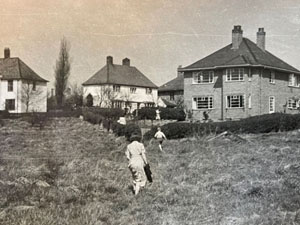 Cuthbert continued to run the pottery until his death in 1966. 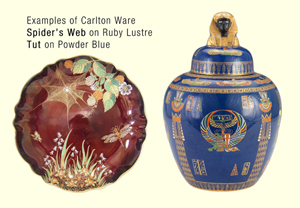 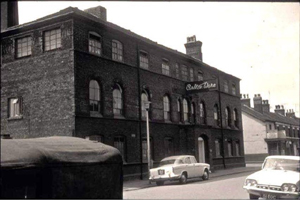 After Cuthbert Wiltshaw's death in 1966 the company was sold to Arthur Wood & Sons the following year.

After finding their feet, they carried on Carlton Ware's tradition by introducing many original pots, especially those designed by Roger Michell and Danka Napiorkowska of Walking Ware fame but also by in-house designers Pam Souch and Dawn Mincher. 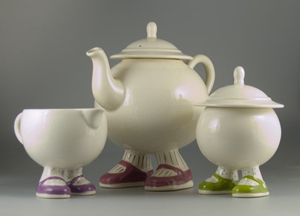 In 1926 Cuthbert had registered the Carlton Ware Script mark (written in his hand) as a trade mark and this too was sold by the receivers. The trade mark was bought by John McCluskey, who made ceramic hardware in his industrial unit in Stone. Mr. McCluskey relaunched Carlton Ware in 1990 with a range of novelty teapots. This enterprise was short lived and eventually the trade mark was sold to a Francis Joseph Salmon in 1997.

The Carlton Works in Copeland Street was sold in 1989 to a property developer and converted into workshops, offices and student accommodation. The Carlton Ware trade mark, known as the script mark, was sold separately and subsequently used on ware made by various other Staffordshire potteries, though branded Carlton Ware, as it is known, ceased to be marketed in 2014.

The sale of the Carlton Works was a sad but typical end for a much loved Staffordshire pottery, although Carlton Ware's legacy has to be its large range of extraordinary pots made over almost 100 years between 1890 and 1987 and still sought after by collectors today.

Photo shows Carlton bowl with "Nightingale" pattern bought in a Stoke on Trent antiques shop in 2021. 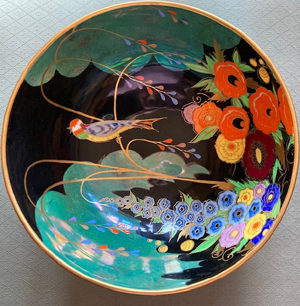 Grateful thanks to Harvey Pettit and www.carltonwareworld.com for some information and images and also to the Wiltshaw family for sharing family photos.