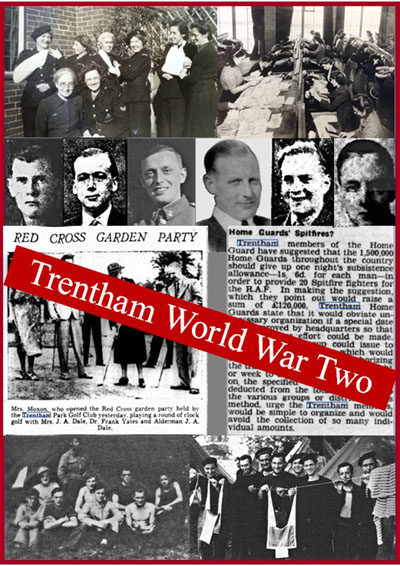 World War Two brought a lot of outsiders into Trentham between 1939 and 1945. The Ballroom of Trentham Gardens became a hive of banking activities under the occupation of the Central Clearing House for the duration of the war. Trentham Park was the site for several military camps during and immediately after the war years. In 1940 tents housed Free French troops and French sailors. From 1942 a warren of Nissen huts were occupied by a Military Convalescent Depot. Out of the numbers of local men who volunteered or were called up for war service, ten did not return. On the home front, local residents volunteered as ARP wardens and civil defence volunteers. A women's working party produced thousands of items for the troops. After the war, remnants of old Trentham began to disappear to make way for road widening and house building.

Click on the names to open the pdf documents in a new tab and increase the viewing size to read the text.

Trentham in World War Two - a timeline. Shows the camps and activities that took place in Trentham and Trentham Park during the war.(video 7:08 minutes)

The timeline is also available as a scrollable document

Banking in the Ballroom - a film about the Central Clearing House relocating its operations from London to Trentham Gardens for the duration of the war (Film 32:30)